Out of all the different varieties of English, the earliest varieties of English, namely British and American, still seem to have the highest status in the world and being taken as a model for English as an Second Language (ESL) learners to this very day.  However, English has also branched out into other native varieties such as Australian, Canadian, New Zealand, etc, as well as non-native varieties such as Singaporean and Indian.  But when English spreads into Asia, it seems as though English can hardly integrate with the Asian languages.  As such, Chinese English is often labelled as ‘Chinglish’, Hong Kong English as ‘Honglish’, Japanese English as ‘Japanglish’, and so on.  But does that mean these Asian varieties of English can never develop into a nativised form like Singaporean English or Indian English?  At present, even though English is an official language of Hong Kong, English does not seem to be a language that Hong Kong people regard as a huge part of their cultural identity, as the daily primary language of use at work and home is Cantonese.  So the question is, if our English proficiency has a direct correlation with our association with a particular culture, does that mean Hong Kong English can never become nativised unless we incorporate English culture into our daily lives?

Whenever we are being evaluated of our English proficiencies, we are often judged harshly in each and every way, from grammar to accentuation to conversational tone, style, formality, etc, as English is the international language through which foreigners communicate with us.  But what makes Hong Kong English sound so improper that people would not accept it as a proper form of English?  First of all, the sound system of Cantonese is fairly limited, and we do not have different forms of a word such as adding ‘ed’ for past tense or ‘s’ for plural, etc.  Hence, whenever we make such grammar mistakes, people tend to treat it as improper, as if we are too lazy to add those particles to the ends of those words.  But why do these things matter so much if we are still able to get our message across to the listener?  After all, it is just a social impression that we generate, and yet, it is something that people judge us by. 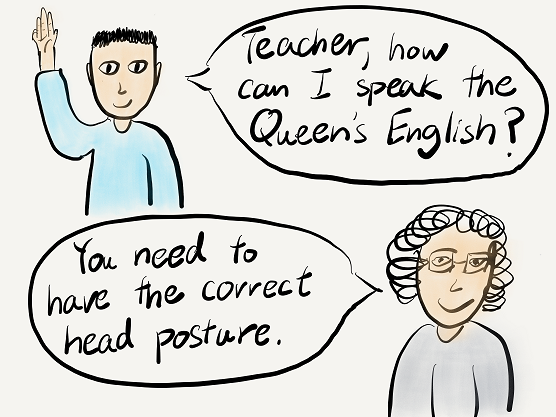 Perhaps the first thing that we should ask ourselves is that if language is just an impression, then why does impression matter?  For instance, impression is when you go to work and get yourself dressed properly.  Impression is when you present yourself well when you first greet somebody.  Impression is when you show good table manners when you have a meal with somebody, and so on.   So if the secret to learning a language is in generating an impression, then should this be something that we focus more on, rather than the technicalities of speaking a language?  This may sound absurd, but if we were to imagine that this were the method of attaining proficiency in a certain variety of English, such as the Queen’s English in the UK, how would it be taught?  I can imagine the teacher giving instructions such as “In order to attain this English accent, you have to have your head held high.  Real high.”

So if learning a language were entirely abstract,  what would it mean for students who are pursuing their English studies in a non-native English speaking country?  Would students be hopeless if they learn English from a non-native speaker?  For one thing, we must be aware that there are still other countries where English is commonly used, even though the sound system still more or less adheres to that of the local dialect, such as in India and Singapore.  So if people from such nations can be proud of their English variety, why can’t we be?  We may be criticised in terms of tense and mispronunciation, but if we never use or practice it enough, our form of English can never develop.  Nonetheless, the popularity of a language boils down to the extent we associate ourselves with the language’s culture, as language and culture are often interwined.  So can English be more than just a workplace language in Hong Kong?  If the answer is that language and culture cannot be separated, and that speaking another language will make us become more like someone from another culture, such as following another set of beliefs and value system, then maybe speaking a foreign language can only go so far in becoming a small part of a local language’s culture.

Hello there! I am passionate about language learning and I hope to be able to share my valuable education insights and experiences with others! You may have a look at my personal website at https://www.megaexplorer.net where I make language games and other things for language learners for fun! View all posts by stanleyyeung